How Eurasia's Tianshan mountains set a stage that changed the world

Nestled deep in Central Asia, the Tianshan is a huge mountain range that stretches from Uzbekistan in the west, all the way through to China and Mongolia in the east.

Though you may not know it, the Tianshan mountain range probably changed the lives of your ancestors – and to this day, you.

Through defining and shaping ancient trading routes of the Silk Road and still now China’s Belt and Road initiative, the Tianshan has been key to the development and spread of human society and culture over thousands of years.

We’re now able to put together geological evidence to see how this incredible mountain range formed. When it all began more than 700 million years ago, the world was a very different place. 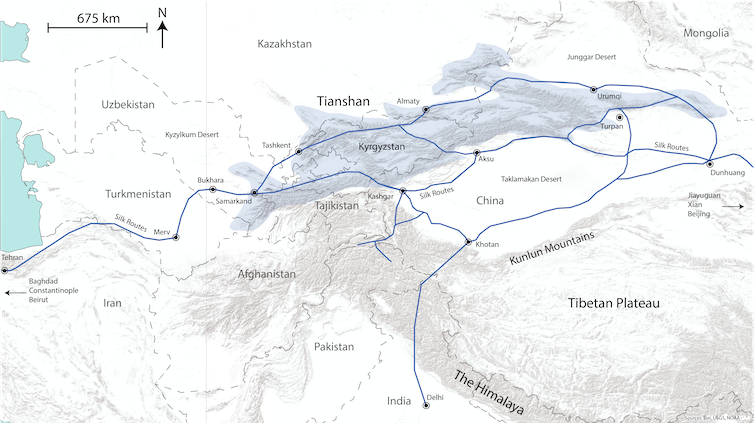 Vital in trade and communications for thousands of years, the paths of the Silk Road passed through and around the Tianshan. Gilby Jepson, Jack Gillespie (using data from ESRI, NASA, and NOAA)

Beginning in 138BCE, the Silk Road trading routes connecting Asia with Europe carried not just merchandise and precious commodities but also allowed movement and mixing of populations with their accompanying knowledge, ideas, cultures and beliefs.

Traders on the Silk Road weaved their way through the valleys of the Tianshan; their path focused by its broad east-west orientation. The ranges offered climatic stability and facilitated relatively easy cross-continent travel.

It was through this network that goods and technology such as paper, the compass, gunpowder, and (of course) silk, were transmitted across the continent to profound impact. 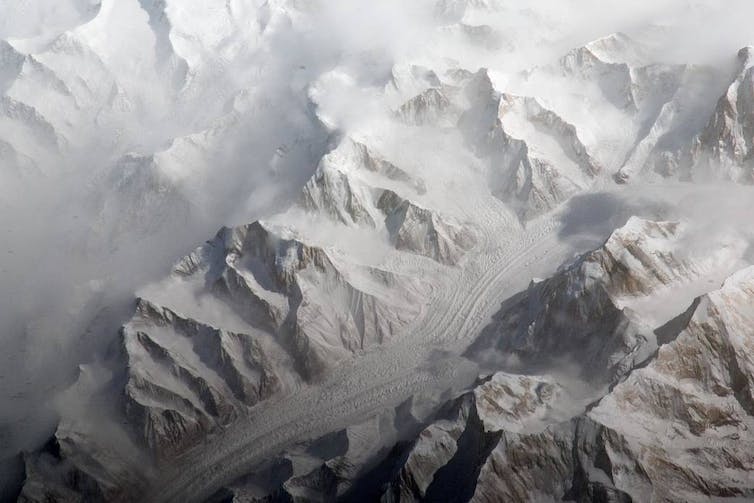 Two high peaks of the central Tianshan: Xuelian Feng with a summit of 6,527 metres above sea level, and the aptly-named Peak 6231 at 6,231 metres - NASA

As a result, numerous wealthy societies and cultures bloomed along the length of the Tianshan, like pearls connected by a line of silk. Cities of the Silk Road such as Samarkand, Bukhara, and Kashgar were important centres of learning and rich trade hubs, a history that is reflected in their gorgeous architecture.

Even today, the land routes of modern China’s One Belt, One Road Initiative – a distributed infrastructure system to facilitate trade – will be governed by the Tianshan geography. 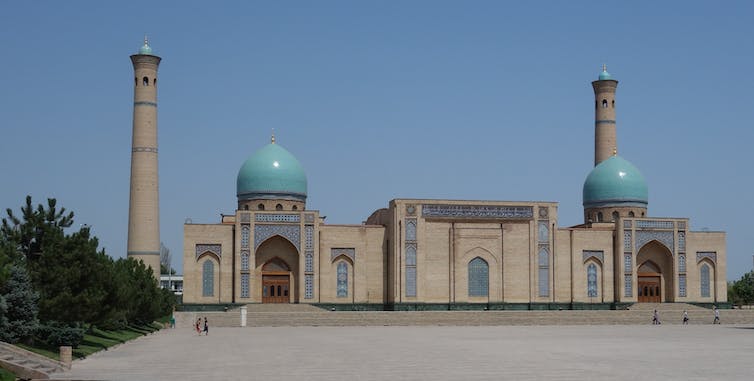 How the Tianshan formed

Geologists look back to well before human existence to understand how the Tianshan came about.

The Earth looked completely different when the Tianshan first began to form 700 million years ago, or more.

There was no Eurasia at this time. Instead, the ancestral Tianshan began in the ocean, starting as volcanic magma and lava that formed island chains above subduction zones (the deep parts of the oceans where the sea bed plummets further down into the deep earth). These early island arcs most likely resembled modern Indonesia.

Over millions of years, these islands merged together to form a land bridge connecting the lands of what we now know as eastern Europe and Siberia.

As this proto-Eurasian continent came together, the land mass grew further due to rocks being scraped off the tectonic plate as it moved downwards. It’s a similar scenario to what’s still going on in the Andes today.

This Andes-style growth of the Tianshan continued until 250 million years ago, when a large continental plate, known as Tarim (today the Taklamakan Desert in far west China) collided with early Asia.

This ancient plate collision between Tarim and the nucleus of Asia created the first version of the Tianshan mountains.

Scars from the past

Bands of smashed rock amid massive fault zones are preserved from these ancient plate collisions. Also referred to as sutures, these scars represent the sites of ancient oceans that used to separate these now-combined continents.

In the Tianshan, these sutures are mostly aligned east-west, and are typically weaker than the rock in between. As a result, when the entire region is placed under stress from the movement of the tectonic plates at the edge of Eurasia, these zones often break, forming faults and earthquakes.

The faults also push rock up on top of other layers and form mountains – giving the fundamental east-west alignment of valleys and mountains in the Tianshan region.

The Dzungarian Alatau, Kazakhstan; one of the many east-west trending ranges that dominate the Tianshan. Gilby Jepson, Author provided

The positioning of these geographical features had a major impact on human history. The spread of domesticated animals and plants from their places of origin, whether wheat from the Fertile Crescent or horses from Central Asia, would not have progressed so smoothly without these structures. The similar climate along latitudinal valleys helped horses, pigs, cattle, wheat, barley, and all the other biological hallmarks of advanced agricultural societies spread.

When India collided with Asia

After the Tarim-Asia collision 250 million years ago, the Tianshan mountains underwent significant erosion. This process of wearing down took place over hundreds of millions of years, causing central Asia to look much like the arid, weathered hills of central Australia. 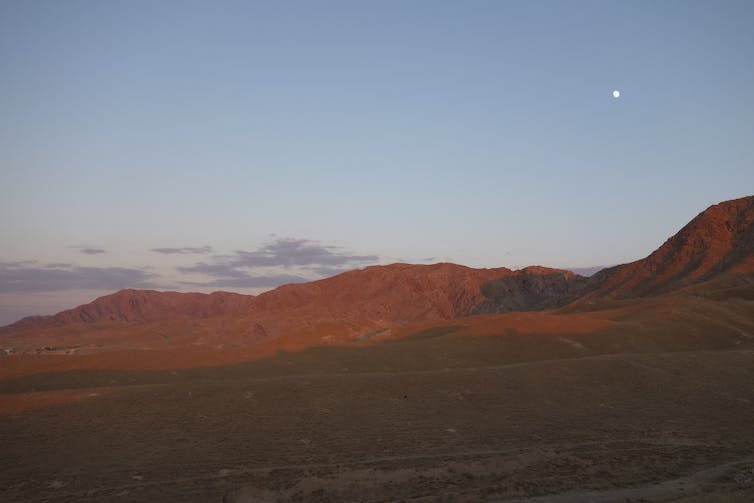 But then a new geological event forced the mountains back up again: the collision of India with Asia between 50 to 30 million years ago.

In addition to driving up the Himalayas and the Tibetan Plateau at the site of the collision, this collision reactivated ancient sutures in the Tianshan. The forces caused many of the low hills along the Tianshan to be thrust back up.

This is the modern topography of the Tianshan that we see today.

As well as providing structures for human activities, mountains like the Tianshan have played other roles in shaping non-human life on Earth.

One important way they do this is through influencing the climate of the planet. The formation of mountain ranges exposes vast areas of fresh rock. The weathering activity of rain and air in these rocks over time creates chemical reactions that locks up huge volumes of carbon dioxide and other molecules. This has the effect of reducing the greenhouse effect and cooling the planet on a timescale of millions of years.

Another effect of the erosion of rocks is that they release chemicals that were vital for the first life on Earth, and are still essential for our own existence today. 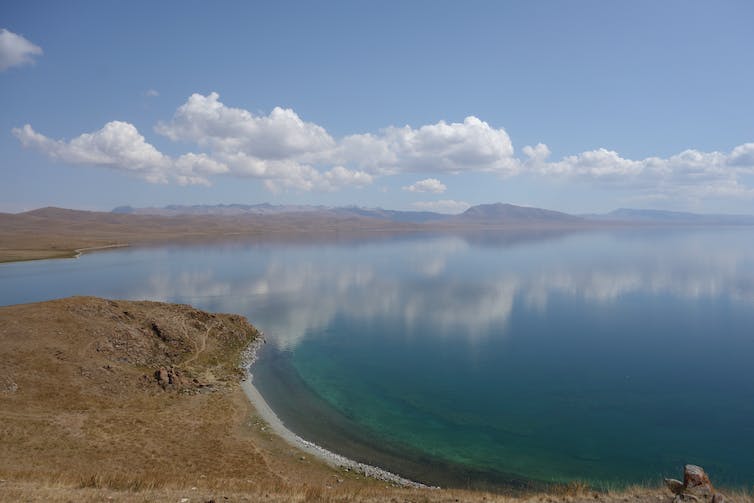 Phosphorous, in particular, is thought to have been lacking in the early oceans, its supply limiting life as it is an essential component in DNA. The weathering of phosphorous-rich rocks could have been the driver for billion year old life to bloom.

The critical link between the deep earth, plate tectonic processes and the climate is one of considerable active research. It feeds into major questions. How did the Earth become habitable for complex life? Does the formation of mountains control ice ages?

Answering these questions, and others like them, is important if we are to properly understand our place in the world and the forces controlling the development of our dynamic Earth.