The Australian continent has a remarkable history — a story of isolation, desiccation and resilience on an ark at the edge of the world.

It is a story of survival, ingenuity, and awe-inspiring achievements over many years.

Shortly after the dinosaurs died out 65 million years ago, Australia was torn from the supercontinent of Gondwana by immense tectonic forces and began its long, lonely, journey north towards the equator.

The lush temperate forests of Gondwana slowly disappeared as the Australian landmass pushed north, preserving a snapshot of faunal life from a much earlier evolutionary time.

This antipodean ark carried a bizarre cargo of marsupials who were spared the fate of their kin on other continents who were decimated by the rise of placental mammals.

By about 5 million years ago the slow-motion collision of Australia into the Pacific and Indian tectonic plate began to push-up the now four-kilometre high mountains of central New Guinea.

This collision also formed the small stepping stones of islands across the Wallace Line which almost, but never quite, connected Australia to Asia through the Indonesian archipelago. They will meet in another 20 million years or so and Australia will become a vast appendix of the Asian landmass.

At the beginning of the Pleistocene period around 2.8 million years ago, global climate began to cycle dramatically between glacial periods, or ice ages, and interglacials, the warm phases between them. As the ice sheets waxed and waned over these cycles, each lasting between 50,000 and 100,000 years, sea levels rose and fell by up to 125 metres.

At times of lower sea level Australia, New Guinea and Tasmania were joined to form the single continent we know as Sahul.

While remnants of the Gondwanan forests persisted in cooler and wetter parts like Tasmania and high in the Australian Alps, the continent became a wide brown land of desert, grassland and savanna; of droughts and flooding rains.

Fast forward to 130,000 years ago to a period scientists call the last interglacial — the stretch of time between the last two ice ages. This was a time when Australia’s climate and landscape looked a like lot it does today. 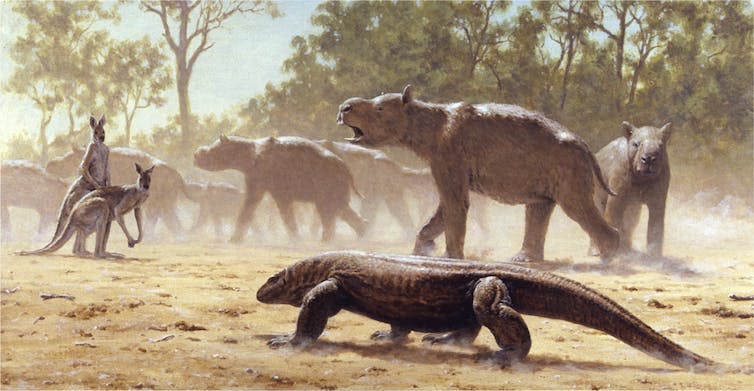 An impression of a giant lizard, Megalania, stalks a herd of migrating Diprotodon, while a pair of massive megafaunal kangaroos look on. Laurie Beirne

Kangaroos that could browse on leaves growing on trees three metres from the ground, three ton wombat-like Diprotodons and giant flightless birds the size of a moa (Genyornis newtonii) foraged across the landscape. These monsters became meals for the carnivorous marsupial lion (Thylacoleo carniflex) and the 4.5m long venomous goanna Megalania.

A strange menagerie indeed had evolved on the evolutionary ark that became Australia!

Meandering rivers channelled monsoon rains from the north into Australia’s vast arid centre. Kati-Thanda (Lake Eyre) was 25 metres deep and joined up with Lake Frome and other smaller basins to create a massive inland water body the size of Israel, with a volume equivalent to 700 Sydney harbours.

Over the next 70,000 years or so the ice slowly began to build up on Antarctica and in the northern Hemisphere. As a result, sea levels dropped, exposing huge areas of once drowned land as Australia once more joined its island neighbours to form the enlarged continent of Sahul.

About this time a new kind of placental mammal – Homo sapiens – had begun to move out of Africa, and would eventually make its home across Asia.

Around 74,000 years ago, the Mt Toba volcano’s supereruption — the largest in the last 2 million years – spread 800 cubic kilometres of volcanic ash and debris widely across Asia.

By plunging the planet into a long volcanic winter, Mt Toba may have delayed human ancestors making their way out of Africa to our doorstep. However, sometime before 50,000 years ago Homo sapiens finally reached Southeast Asia.

Along the way they ignored or joined with earlier evolutionary cousins including Homo erectus, Homo neanderthalensis, Homo floresiensis (the ‘hobbit’), the new kid on the block Homo luzonensis, and the enigmatic Denisovans.

And so, the most potent placental mammal to ever walk the earth was now poised to enter a continent dominated by ancient marsupial giants – Sahul.

Making landfall on Sahul was no easy task and says much about the capabilities of the first people who entered the continent; the first Australians.

Even with sea level 70 metres lower than today the journey by any route involved at least six island hops followed by a final open ocean crossing of around 100 kilometres before Australia could be reached.

Of course, this is science’s story; for many Indigenous Australians their ancestors have always been here.

The peopling of Sahul didn’t happen by chance. Genetic research suggests hundreds to thousands of people must have purposely made the crossing. The success of these mariners speaks much of their abilities as also demonstrated by their rock art, jewellery, advanced stone tool technologies, watercraft construction and burial rituals, in the region, all before 40,000 years ago.

The time of human arrival has been progressively pushed back over the last few decades. It’s now widely accepted that humans first made landfall on Sahul by 50,000 years ago, or perhaps even as early as 65,000 years ago. 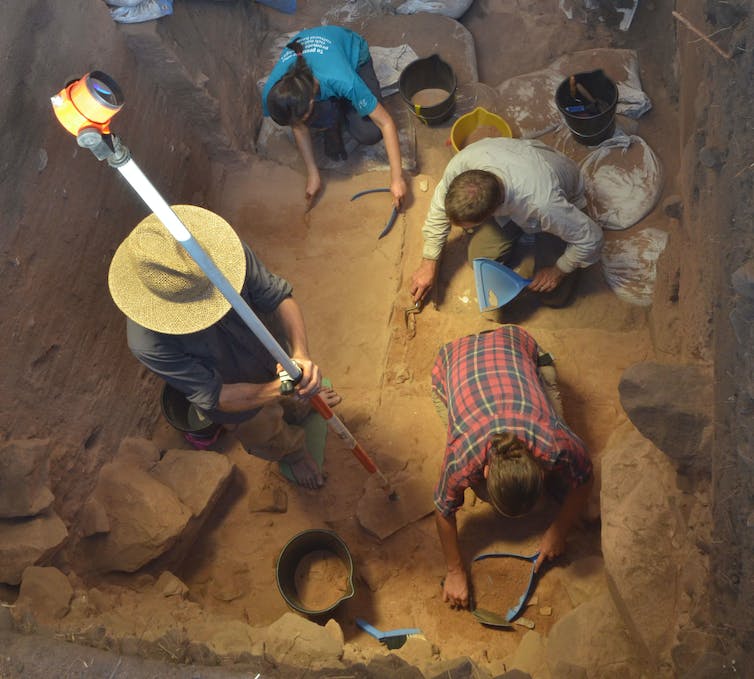 It’s also clear that once people arrived, they settled the continent very rapidly. In only a few thousand years people were living from the western desert coasts to the highly productive (now dry) Willandra Lakes in western New South Wales.

Once every nook and cranny was occupied movement became restricted – Aboriginal people stayed on their particular country, literally, for the next 50,000 years.

What happened to the megafauna?

The impact that human arrival had on the marsupial continent of Sahul remains hotly contested. Many have argued that people wiped out the megafauna within a few thousand years of arriving.

But there’s now clear evidence that some megafauna lived on beyond this time. If landfall was at 65,000 years, it would show that people and megafauna coexisted for a very long time.

There’s also a body of opinion that suggests climate change, as the world headed into the last ice age, wiped out populations of megafauna already under stress.

The large inland lakes, in total about the size of England, began to dry out from around 50,000 years ago. This drying has been ascribed to natural climate change and human modification of the environment through burning and the hunting of megafauna.

Sahul, during the last ice age (beginning 30,000 years ago and peaking 20,000 years ago) was cold – around 5 degrees colder – and much drier than present. Sea level was 125 metres lower and, as a consequence the continent was almost 40% larger than it is today.

Shifting sand dunes expanded over much of the arid interior, ice caps and glaciers expanded over interior Tasmania, the southern highlands of New South Wales and along the mountainous spine of New Guinea.

Strong winds carried dust from the now dry interior lake basins southeast into the Tasman Sea and northwest into the Indian Ocean. A large brackish inland sea, bigger than Tasmania, occupied the Gulf of Carpentaria.

Humans and animals alike retreated into locations where water and food were more assured in a broader inhospitable landscape – some perhaps around the coastal fringes of Sahul.

Ten thousand years later and everything began to rapidly change again. From shortly after 20,000 years ago global climate began to warm and the planet’s ice sheets began to collapse. The water flooded back into the oceans and sea-levels began to rise, at times up to a whopping 1.5 centimetres per year. 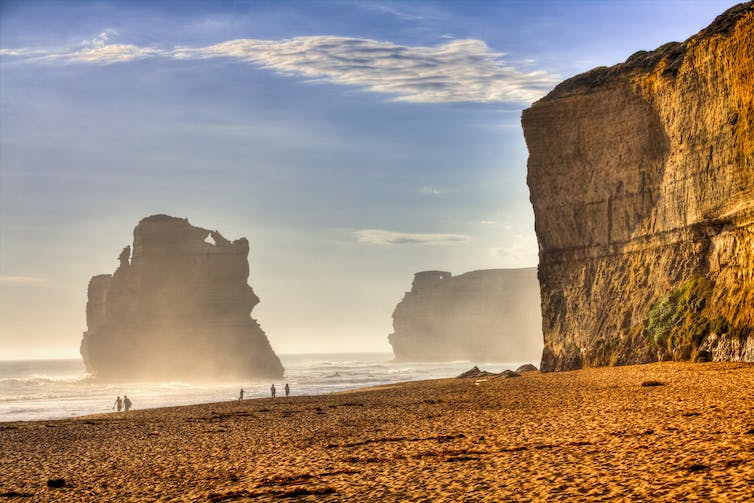 Australia’s coastline has moved before thanks to changes in sea level. Flickr/Travellers travel photobook, CC BY 4.0

In some parts of Sahul this shifted the coastline inland by 20 metres or more in a given year. This radical reconfiguration of the coastline went on for thousands of years with a significant impact on Aboriginal societies.

This history is recorded today in Aboriginal oral histories of coastal flooding and migration from this time. As sea level rise squeezed people into a rapidly shrinking landmass, population density rose and in turn may have ushered in a new era of social, technological and economic change in Aboriginal societies.

Sea level rise severed the connections to Tasmania and New Guinea for the final time, reaching a peak about 1-2 metres above modern levels some 8,000 years ago, thereafter stabilising slowly to pre-twentieth century levels.

Climate settled into a pattern broadly similar to present, with the last few thousand years seeing increased intensity of the El Nino-La Nina climate cycles leading to the boom and bust cycles we live with today.

Over the last 10,000 years, Aboriginal populations increased, possibly in the later stages with the help of the recent placental mammal import, the dingo.

When Europeans invaded Sahul’s ancient shores, one blink of an eye ago, there were perhaps more than 1,000,000 people in 250 language groups across the continent.

They had not only survived, but thrived, on the driest inhabited continent on earth for 50,000 years or more.

What an epic story! And there is so much more to learn.